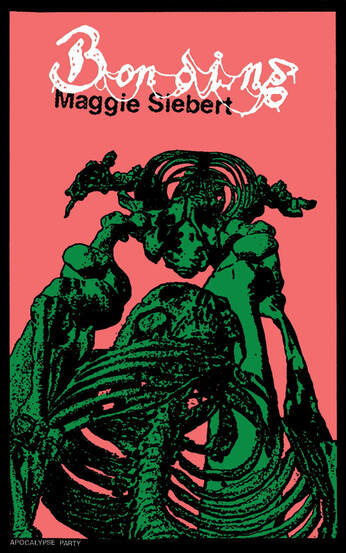 "Maggie understands that splatter for splatter’s sake is boring. Psychopathy is boring. Coldness is boring. She’s interested in feeling, and when her stories turn violent (as they frequently do), it’s with a surreal emotional barbarity that distorts the entire world. You can mop up blood with any fabric. Maggie’s concern is with the wound left behind, because the wound never leaves—it haunts. As a result, each of these stories leaves a wound of its own. Some weep, watching as you try (and fail) to recover. Others laugh. But never without feeling."
—B.R. Yeager, author of Negative Space


"And once finished, I felt like my tongue had been misplaced, guts heavy and expanded … gums numb with a tongue that’d been put elsewhere, my mouth clean around a pipe weaving up through pitch and shadow … and well past ready, primed for delight, waiting but knowing I had already been filled to skin; crying shit, hearing piss, fingernails seeping bile, pores dribbling blood, soles slopping off and out to meet a drain mid-floor …"
—Christopher Norris, author of Hunchback ’88
​
Pre-order on Amazon
Pre-order on Barnes & Noble
Pre-order on Bookshop