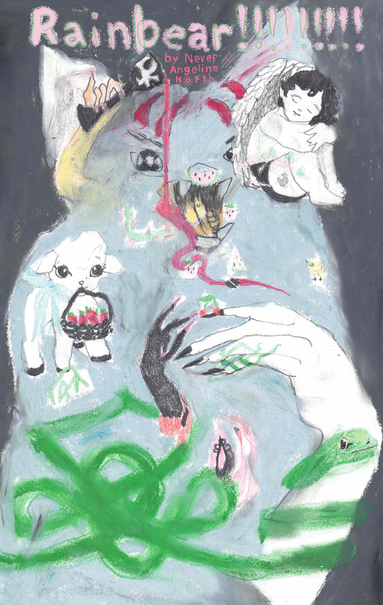 "Rainbear!!!!!!!!! is writing at its wildest, maddest, furthest, goofiest, most blatant, most shameless, most free."
—​Daniel Handler, author of Lemony Snicket's A Series of Unfortunate Events

"North's gonzo eclecticism only partially camouflages her penetrating insight and masterful command of language. With Rainbear!!!!!!!!! she has created something part fairytale, part Old Testament parable, and entirely unique, a heartbreaking creative vision of regression."
—​Gretchen Felker-Martin, author of Manhunt

"I can't tell you what happens in Rainbear!!!!!!!!!, and if someone tries to, good luck to them. Frank Stanford once said "It wasn't a dream, it was a flood," and I have spent most of my life believing I knew what that meant, but it turns out I didn't. This is what that means. This isn't a dream. This is a flood. And we should all be so lucky as to drown in Never's waters."
—​Sasha Fletcher, author of Be Here to Love Me at the End of the World


Rainbear!!!!!!!!! is the story of a woman who lives in a coffee shop where she makes a job out of loving people while inventing worlds in her dreams. The coffee shop is staffed by a barista-cum-border-guard who people show up to stab every week. Later, the narrative channels 18th century Jewish folktales as she is told a bedtime story about two queer lovers, who are themselves then told a dreamlike, quasi-erotic tale of a pagan prophet without a home. In this way, narratives eat each other and turn inside out as stories are found within stories and new adventures are told by unexpected rainbow bears that are also mountains and pages of journals are found papered inside the nests of vomitbirds.


Never Angeline North is author of the books Sea-Witch (Inside the Castle, 2020), Careful Mountain (CCM, 2016), Sara or the Existence of Fire (Horse Less Press, 2014) and Wolf Doctors (Artifice Books, 2014). She lives in beautiful Olympia, WA with her girlfriend, her girlfriend's boyfriend, their dog, a snake and two rats. She is online at never.horse.